Showing posts from July, 2018
Show All

A pair of puffins. 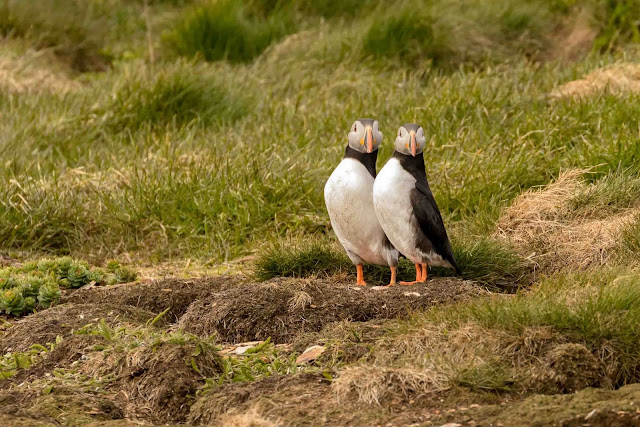 Elliston, Newfoundland, Canada, June 2018 Standing at their burrow. Foggy day but it still came out after a bit of editing. Fratercula arctica A lighthouse keeper on Iceland’s Westman Islands has been banding puffin chicks for more than 60 years. The islands are home to the largest puffin colony in the world, and the keeper, Oskar Sigurdsson, earned a spot in the Guinness Book of World Records for his prolific banding: more than 90,000 birds in that time, including more than 55,000 puffins. source - https://www.allaboutbirds.org/guide/Atlantic_Puffin/
Post a comment
Read more 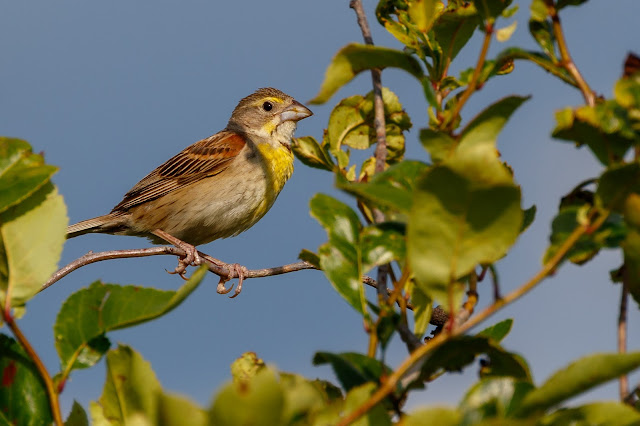 While wandering in a meadow full of ticks we saw numerous dickcissels. None were in breeding plumage but we still got to see them. Spiza americana Nearly all Dickcissels winter far south of their breeding range, but each year small numbers can be found scattered within the breeding range throughout the winter. Individual Dickcissels frequently turn up far from the normal range, often joining in with House Sparrow flocks.
Post a comment
Read more
July 29, 2018 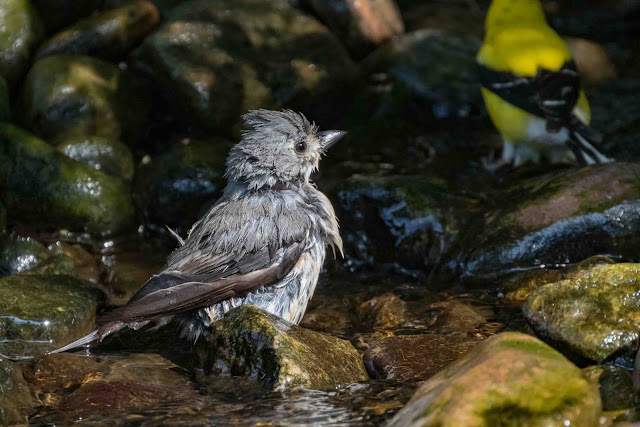 Tufted titmouse, Rondeau Provincial Park, Ontario, Canada, July 28, 2018 Another recent visitor to our little pond. The sound of water really brings the birds in. Baeolophus bicolor Tufted Titmice nest in tree holes (and nest boxes), but they can’t excavate their own nest cavities. Instead, they use natural holes and cavities left by woodpeckers. These species’ dependence on dead wood for their homes is one reason why it’s important to allow dead trees to remain in forests rather than cutting them down. source -https://www.allaboutbirds.org/guide/Tufted_Titmouse
Post a comment
Read more 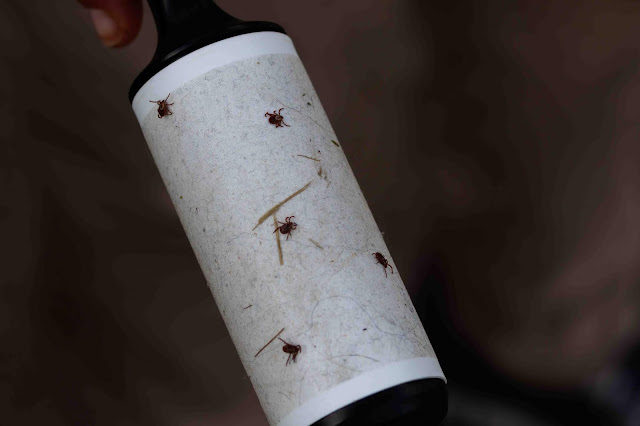 If you are going where there are ticks keep a lint roller in your car. Before getting in, roll your pants and socks for unwanted cargo. Anne and I had about 30 between us. The photo doesn't really show how many there were. 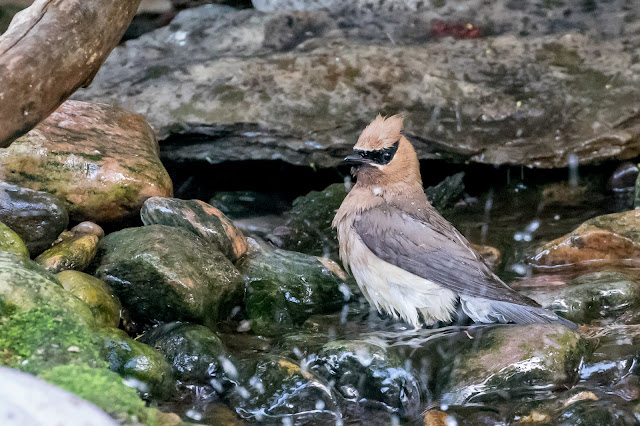 Had a group of cedar waxwings descend on the pond yesterday. he way they were splashing I thought they would empty the pond.
Bombycilla cedrorum The oldest recorded Cedar Waxwing was a male and at least 7 years, 1 month old when he was recaptured and rereleased during banding operations in Maryland in 2014. He had been banded in the same state in 2008. source - https://www.allaboutbirds.org/guide/Cedar_Waxwing/
Post a comment
Read more 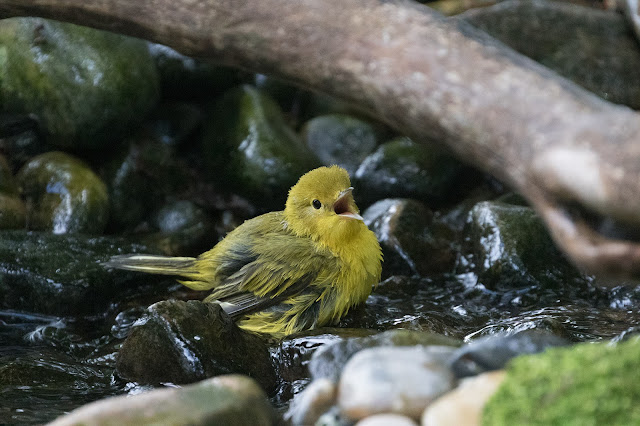 Yellow warbler, July 23, 2018, Rondeau Provincial Park, Ontario, Canada.
Had a pair of yellow warblers in the pond/water feature. One was gaping, as if singing. Made me think of Chad & Jeremy - A summer Song. https://www.youtube.com/watch?v=_D2XD341xHo Setophaga petechia In addition to the migratory form of the Yellow Warbler that breeds in North America, several other resident forms can be found in Mexico, Central America, and the Caribbean. Males in these populations can have chestnut caps or even chestnut covering the entire head. source - https://www.allaboutbirds.org/guide/Yellow_Warbler/
Post a comment
Read more 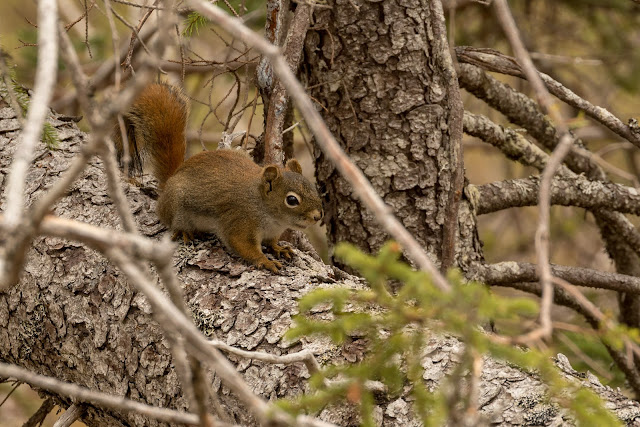 Red squirrels were introduced to the island of Newfoundland in the early 1960s and have spread out since, preying on songbird eggs and young. Researchers found that thrushes were greater than three times more likely to be detected at sites where squirrels were not observed, according to a paper published in Avian Conservation and Ecology. Cute but a disruptive species.
Post a comment
Read more

Goldfinch at the pond. 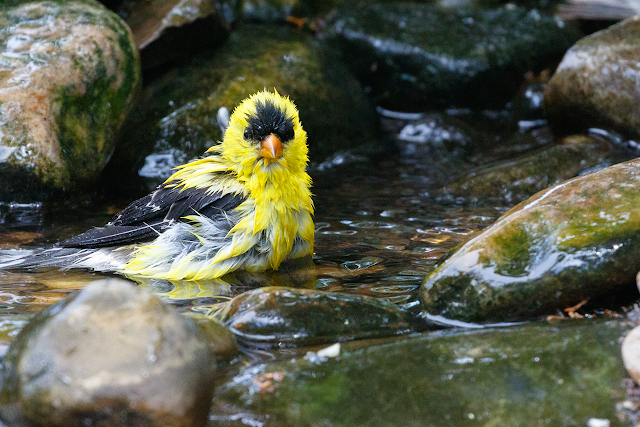 July 15, 2018 Rondeau Provincial Park, Ontario, Canada. Activity is starting at the little pond/water feature in the yard. Nothing exotic, just the regulars. A few months before we get warblers on the fall migration.
Spinus tristis
Paired-up goldfinches make virtually identical flight calls; goldfinches may be able to distinguish members of various pairs by these calls.
source - https://www.allaboutbirds.org/guide/American_Goldfinch
Post a comment
Read more 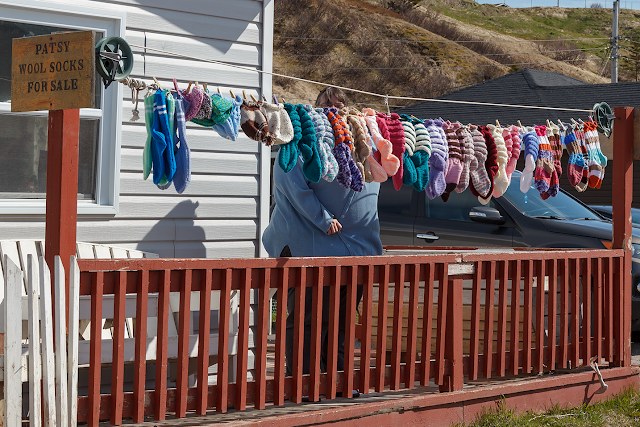 While investigating a small harbour town we came across Patsy Wool Socks.

We had already bought a pair of alpaca socks so we didn't buy from Patsy. 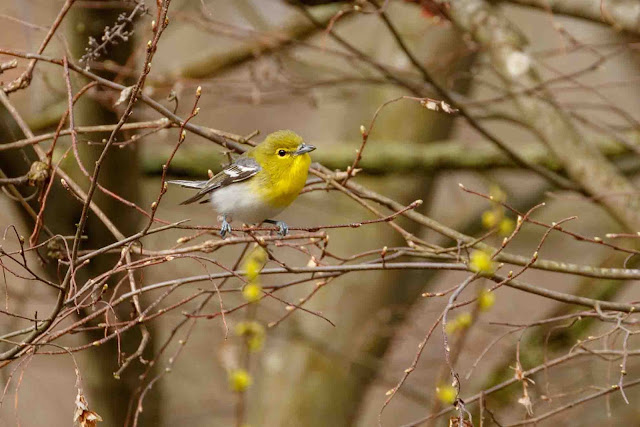 From May 6, 2018. A yellow-throated vireo at Rondeau Provincial Park, Ontario, Canada. Nice of it to come into the open, usually I see them behind branches or too far away.
Vireo flavifrons
In many North American songbirds, only females incubate and brood, but not vireos. Male Yellow-throated Vireos also incubate eggs and brood young, taking turns with the female throughout the day.
source - https://www.allaboutbirds.org/guide/Yellow-throated_Vireo/
Post a comment
Read more 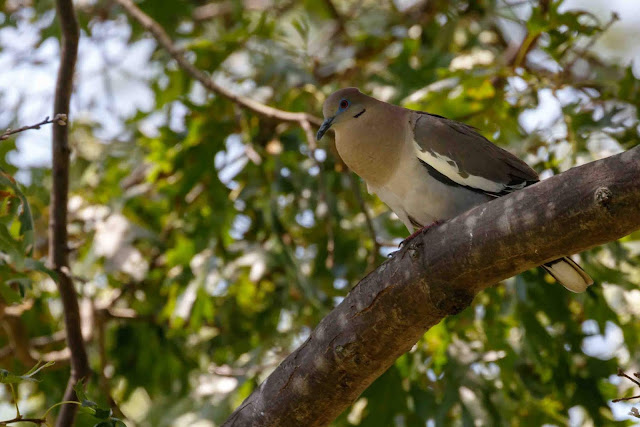 There has been a white winged dove at Rondeau Provincial Park, Ontario, Canada, on and off this spring/summer. They are a bird normally found in the American south west not the Great Lakes. Today I got a call that there were now two white wings sitting in the same tree. He is in mid call as indicated by the puffed out throat. Maybe they will nest.
Post a comment
Read more 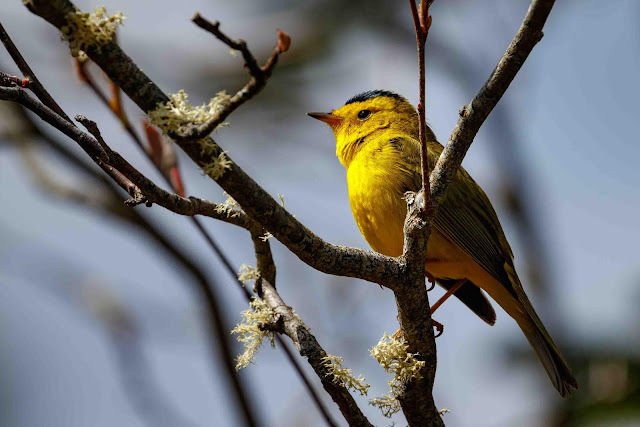 After doing the pelagic trip out to Witless Bay Ecologiacl Reserve with O'briens Boat Tours we wandered down the road to Tors Cove and found La Manche Provincial Park. Great place to go for a walk. The best bird I was able to get a photo of was a Wilson's warbler. Cardellina pusilla Naturalist Alexander Wilson, often called the "father of American ornithology," described the Wilson’s Warbler in 1811 which he called the “green black-capt flycatcher.” source - https://www.allaboutbirds.org/guide/Wilsons_Warbler/
Post a comment
Read more 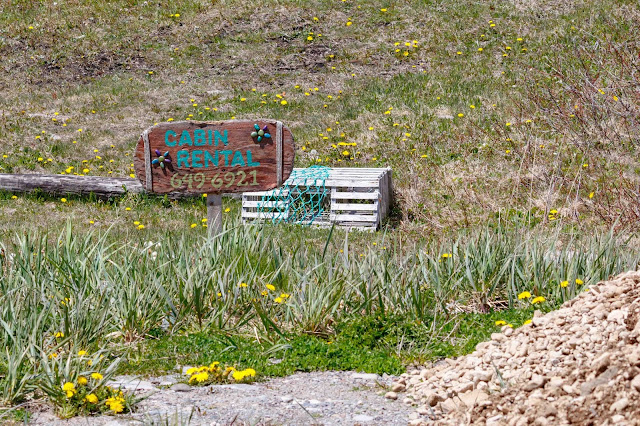 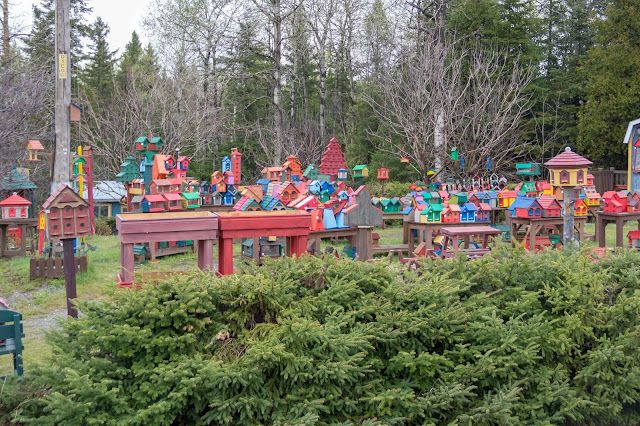 In Quebec near the New Brunswick border there is a man with a hobby.
He has plugged all the openings with pieces of foam.
I wonder why?
Post a comment
Read more 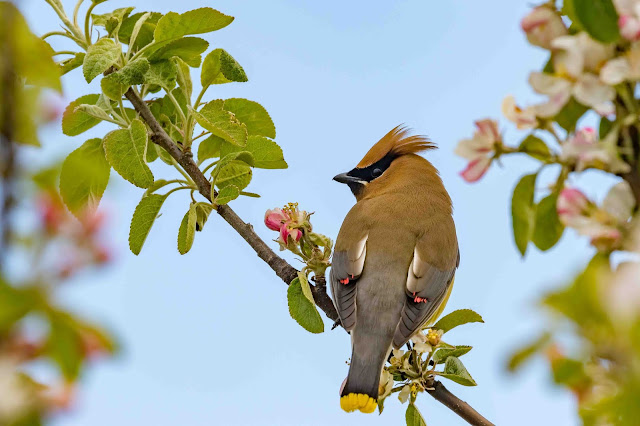 While visiting the Hopewell Rocks at the Bay of Fundy we spotted a group of cedar waxwings mobbing a tree and eating the blooms. Bombycilla cedrorum Building a nest takes a female Cedar Waxwing 5 to 6 days and may require more than 2,500 individual trips to the nest. They occasionally save time by taking nest materials from other birds’ nests, including nests of Eastern Kingbirds, Yellow-throated Vireos, orioles, robins, and Yellow Warblers. source -https://www.allaboutbirds.org/guide/Cedar_Waxwing
Post a comment
Read more 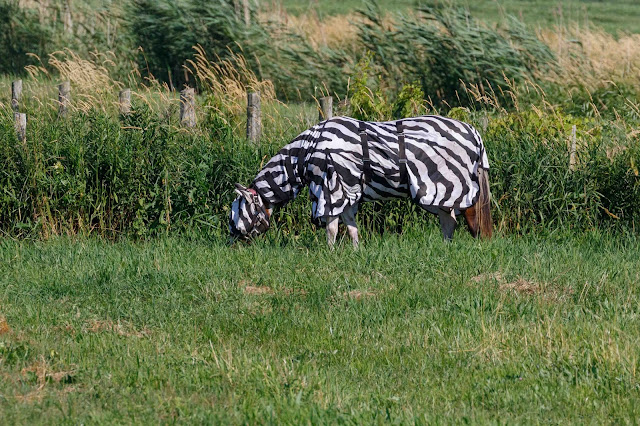 If you need a horse blanket why not have some fun with it.

They don't mean me. 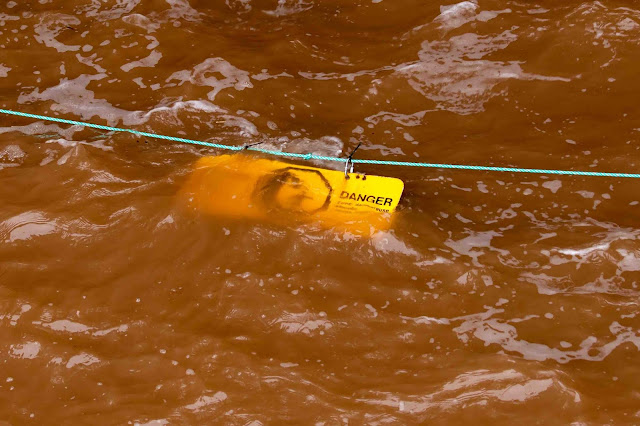 Sometimes warning signs are for everybody.
This one was at Hopewell Rocks, a provincial park in New Brunswick where the tides of the Bay of Fundy are at their highest. You can walk up to the sign at low tide.  This was way before high tide. You can walk on the ocean floor at low tide and then watch it come up 35-45 feet. As usual on this trip it was foggy. http://www.thehopewellrocks.ca/
Post a comment
Read more 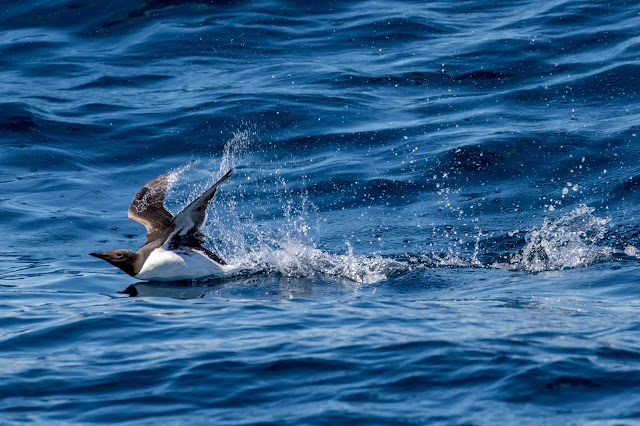 The common murre runs/flaps its way across the water to get airborne. Due to its black and white pattern it looks like a penguin, at least to me.

Uria aalge
In the Atlantic, some populations include "bridled" or "ringed" individuals, which have a white eye-ring and a white line extending backward from the eyes. Bridled birds are more common farther north.
source - https://www.allaboutbirds.org/guide/Common_Murre/
Post a comment
Read more 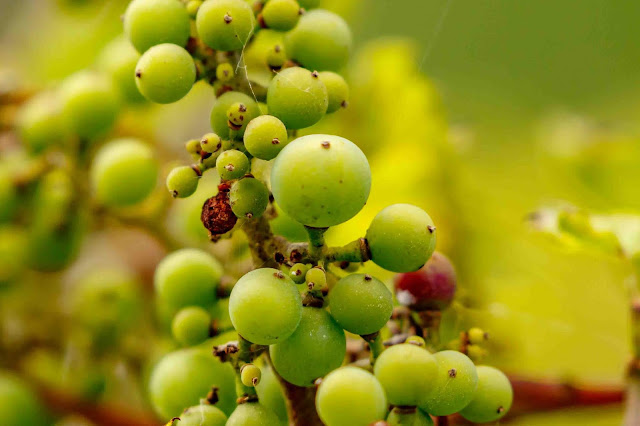 It isn't Waldo but can you see the happy face in the grapes? 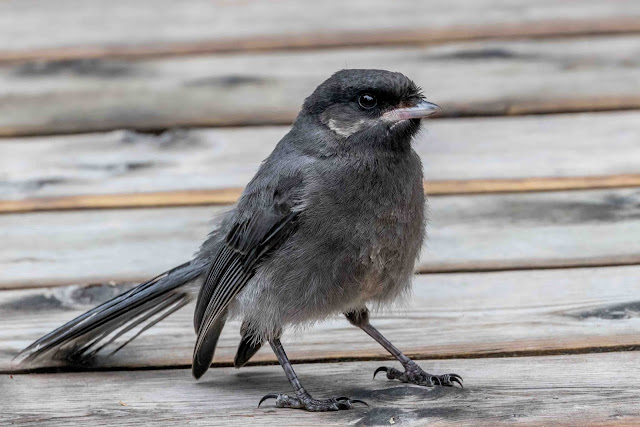 While we were travelling in Newfoundland we came across an attraction called Salmonier Nature Park. Most of the animals were rehabs that couldn't be released back into the wild. Due to the habitat local animals and birds were using the space. We spotted several young gray jays chasing through the trees. Perisoreus canadensis The Gray Jay stores large quantities of food for later use. It uses sticky saliva to glue small food items to tree branches above the height of the eventual snow line. It may be this food storage behavior that allows the jay to live so far north throughout the winter. source - https://www.allaboutbirds.org/guide/Gray_Jay/
Post a comment
Read more 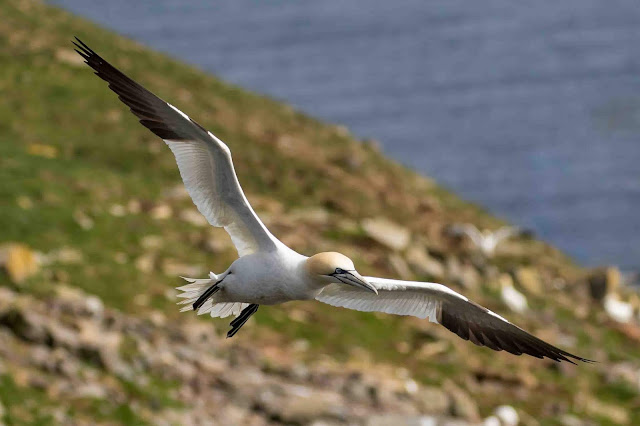 We went to the reserve at Cape St Mary's and were lucky to have a fog free day. Locals told us they have 200 fog days a year.
This is one of hundreds of photos I took that day.
Located about 200 km southwest of St. John's, Cape St. Mary's Ecological Reserve also known as "the Cape" is one of Newfoundland and Labrador's major seabird colonies. During the breeding season, it is home to 24,000 Northern gannet, 20,000 black-legged kittiwake, 20,000 common murre, and 2,000 thick-billed murre. In addition, more than 100 pairs of razorbill, more than 60 pairs of black guillemot, plus double-crested and great cormorant, and Northern fulmar nest there. source - http://www.flr.gov.nl.ca/natural_areas/wer/r_csme/ Morus bassanus Most plunge-dives are relatively shallow, but the Northern Gannet can dive as deep as 22 meters (72 feet). It uses its wings and feet to swim deeper in pursuit of fish. Northern Gannet, Cape St Mary's, Newfoundland, June 6, 2018t/
Post a comment
Read more
More posts