Showing posts from April, 2017
Show All

A pair of house finches, 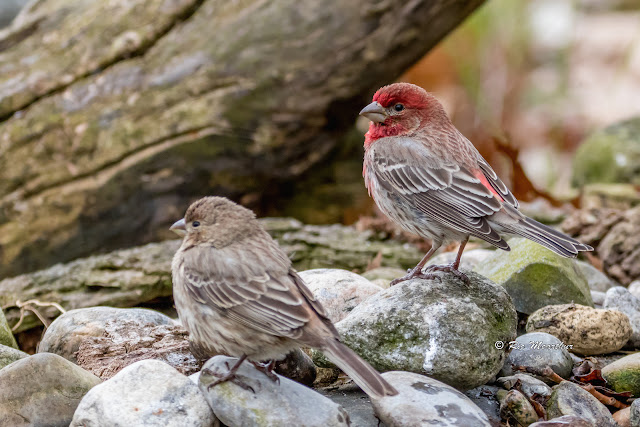 We have had both purple finches and house finches in the yard for a few weeks.
It is more common for us to see the  house finch.

The red of a male House Finch comes from pigments contained in its food during molt (birds can’t make bright red or yellow colors directly). So the more pigment in the food, the redder the male. This is why people sometimes see orange or yellowish male House Finches. Females prefer to mate with the reddest male they can find, perhaps raising the chances they get a capable mate who can do his part in feeding the nestlings.
Post a comment
Read more 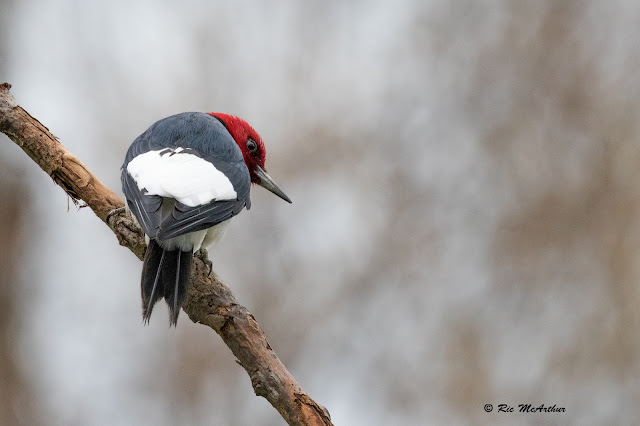 You will have to put up with more red headed woodpecker photos.
We had 3 in the yard today and they were not playing well.
I figure two are males and are trying to figure out who is dominant.
That photo is for another day. 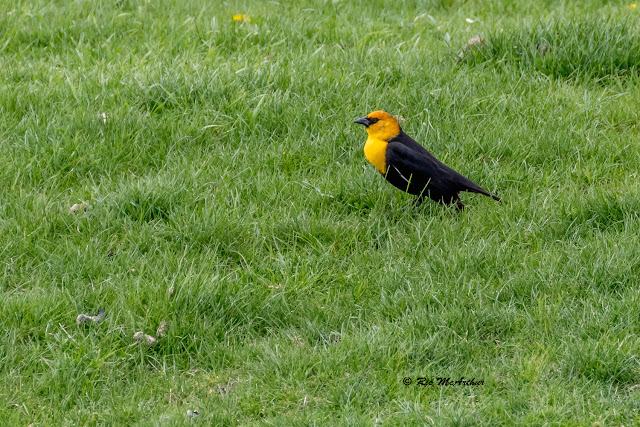 We went to Mitchell's Bay on Lake St. Clair to look for the yellow-headed blackbirds that were being seen. They were exactly where they were reported to be. Birders know that is not necessarily the case, birds have wings and they use them. Xanthocephalus xanthocephalus The male Yellow-headed Blackbird defends a small territory of prime nesting reeds. He may attract up to eight females to nest within his area. The male helps feed nestlings, but usually only in the first nest established in his territory. The other females have to feed their young all by themselves.
Post a comment
Read more 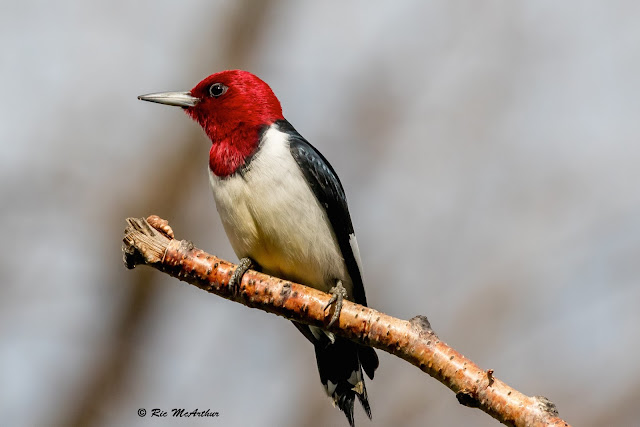 I particularly like red-headed woodpeckers and this one came in to wish me a happy 70th.
Shot through the Wonderful Wildlife Window.

The Red-headed Woodpecker has many nicknames, including half-a-shirt, shirt-tail bird, jellycoat, flag bird, and the flying checker-board.
2 comments
Read more

I crown you King of the Jays. 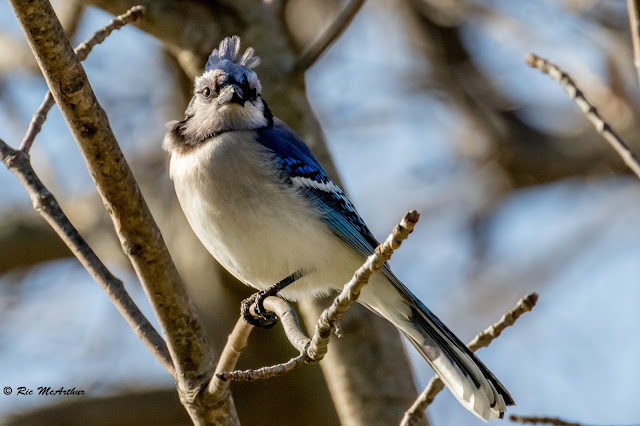 Take about getting your feathers ruffled! This jay had his back to the wind creating a feathered crown. Cyanocitta cristata .
Thousands of Blue Jays migrate in flocks along the Great Lakes and Atlantic coasts, but much about their migration remains a mystery. Some are present throughout winter in all parts of their range. Young jays may be more likely to migrate than adults, but many adults also migrate. Some individual jays migrate south one year, stay north the next winter, and then migrate south again the next year. No one has worked out why they migrate when they do.
Post a comment
Read more

Catch of the day. 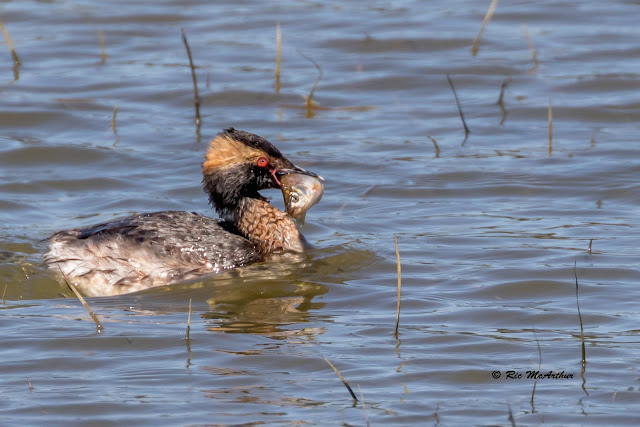 Went to the shorebird cell at Hillman Marsh to see what was around.
The closest birds were horned grebes. Several popped up with fish while we were there.

Like most grebes, the small chicks of the Horned Grebe frequently ride on the backs of their swimming parents. The young ride between the wings on the parent's back, and may even go underwater with them during dives.
Post a comment
Read more

Season of the Owl 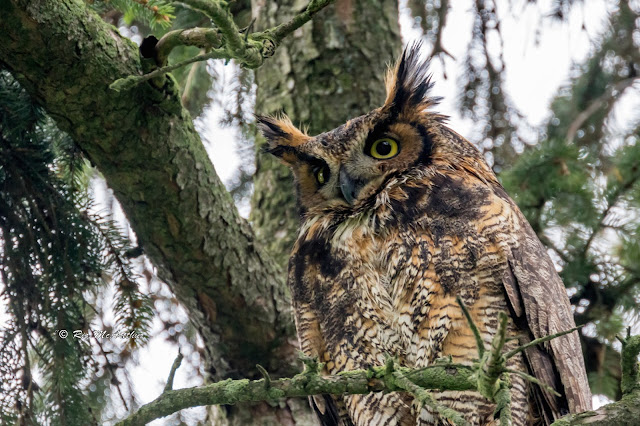 Another Great Horned Owl shot. This one shows why it is called a horned owl. Bubo virginianus Great Horned Owls are fierce predators that can take large prey, including raptors such as Ospreys, Peregrine Falcons, Prairie Falcons, and other owls. They also eat much smaller items such as rodents, frogs, and scorpions.
Post a comment
Read more 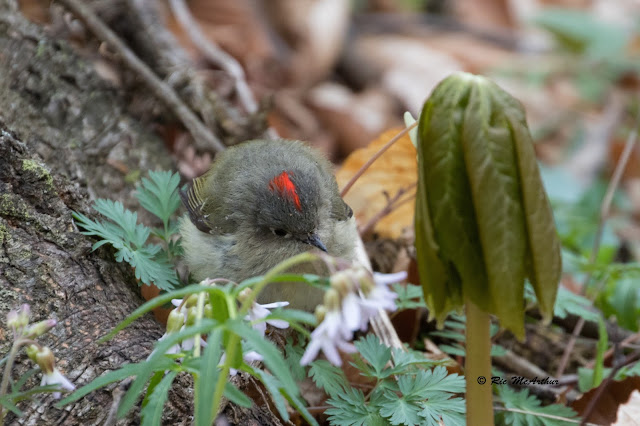 Spotted this one foraging in the flowers. Usually the flit so fast they are hard to photograph, not that this one was easy. Regulus calendula The Ruby-crowned Kinglet is a tiny bird that lays a very large clutch of eggs—there can be up to 12 in a single nest. Although the eggs themselves weigh only about a fiftieth of an ounce, an entire clutch can weigh as much as the female herself.
Post a comment
Read more 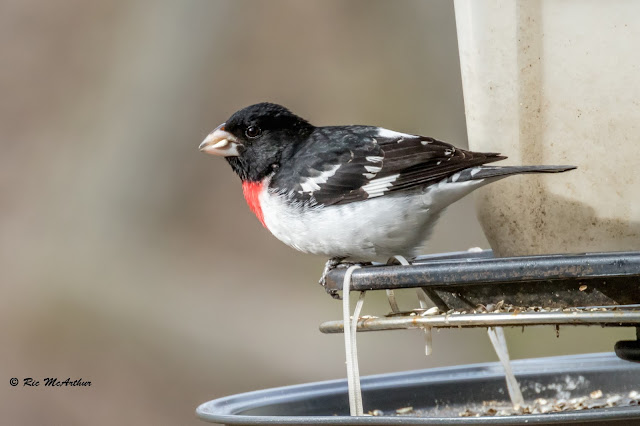 A few new birds in the area including this Rose breasted grosbeak. Rondeau Provincial Park. Pheucticus ludovicianus Rose-breasted Grosbeaks build such flimsy nests that eggs are often visible from below through the nest bottom.
Post a comment
Read more

Just sittin in the grass. 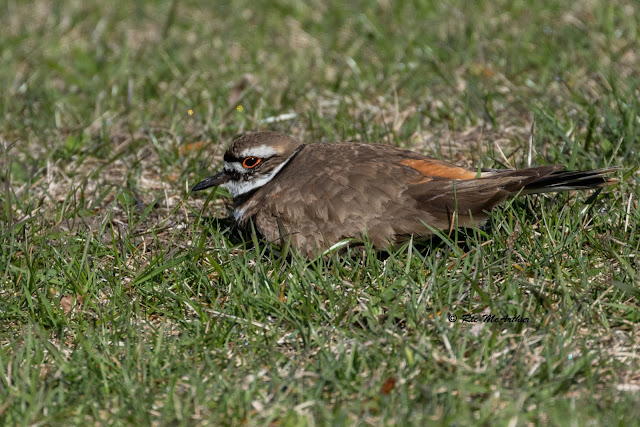 This killdeer sat in the grass and ignored me as I drove by, usually the skitter away. Being as he cooperated I took his picture. Charadrius vociferus Killdeer get their name from the shrill, wailing kill-deer call they give so often. Eighteenth-century naturalists also noticed how noisy Killdeer are, giving them names such as the Chattering Plover and the Noisy Plover. A well-known denizen of dry habitats, the Killdeer is actually a proficient swimmer. Adults swim well in swift-flowing water, and chicks can swim across small streams.
Post a comment
Read more 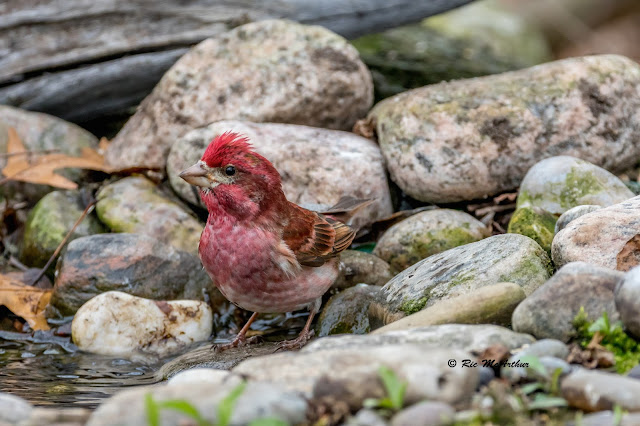 We have had 7 or 8 purple finches, both male and female in the yard for a few days.
Significantly different than house finches.

Haemorhous purpureus
The Purple Finch uses its big beak and tongue to crush seeds and extract the nut. They do a similar trick to get at nectar without eating an entire flower, and also to get to a seed buried inside a fleshy fruit.
1 comment
Read more 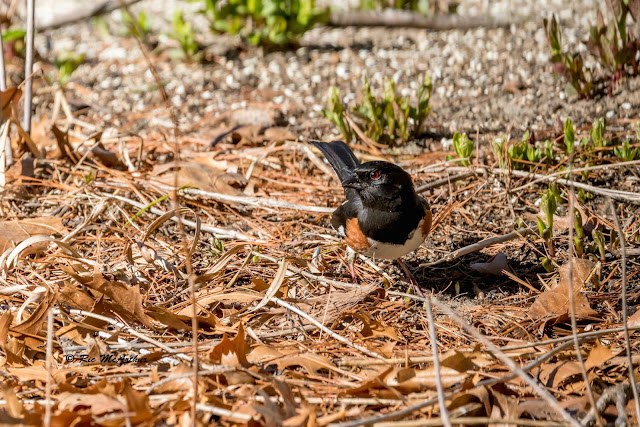 We more often hear the call than see the bird. This one was in the front yard and I managed to open the door and get a few photos. Pipilo erythrophthalmus Eastern Towhees are common victims of the parasitic Brown-headed Cowbird. Female cowbirds lay eggs in towhee nests, then leave the birds to raise their cowbird young. In some areas cowbirds lay eggs in more than half of all towhee nests. Towhees, unlike some other birds, show no ability to recognize or remove the imposter’s eggs. Female cowbirds typically take out a towhee egg when laying their own, making the swap still harder to notice.
Post a comment
Read more
April 18, 2017 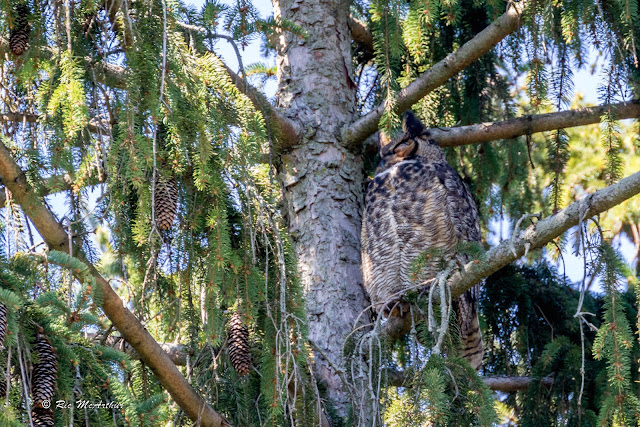 Great horned owl, adult.This is one of the adults watching over the chick I posted yesterday.

Probably 90 feet up in the tree. 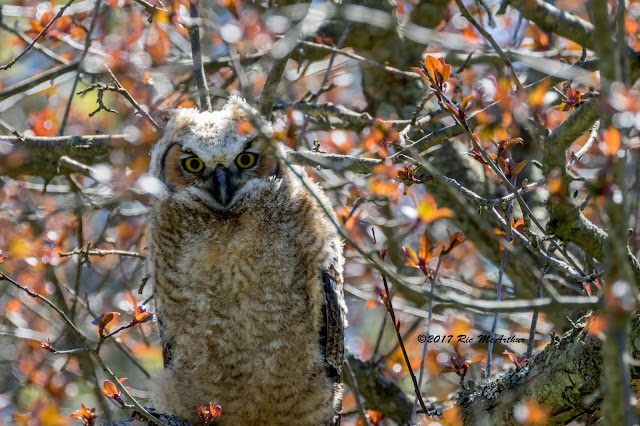 Great Horned Owl chick, London Ontario, April 17, 2017 A well known owl near downtown London. The chicks fledged yesterday and we just saw the one plus an adult. Bubo virginianus Great Horned Owls have large eyes, pupils that open widely in the dark, and retinas containing many rod cells for excellent night vision. Their eyes don’t move in their sockets, but they can swivel their heads more than 180 degrees to look in any direction. They also have sensitive hearing, thanks in part to facial disc feathers that direct sound waves to their ears.
Post a comment
Read more 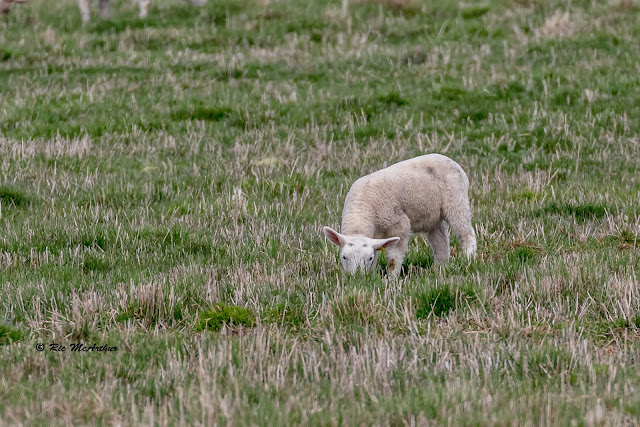 Serendipity - the occurrence and development of events by chance in a happy or beneficial way.A Lowl or possibly a owlamb.One of those weird images you only see once you have it on the computer screen.Take a close look at the lamb's face.
Post a comment
Read more 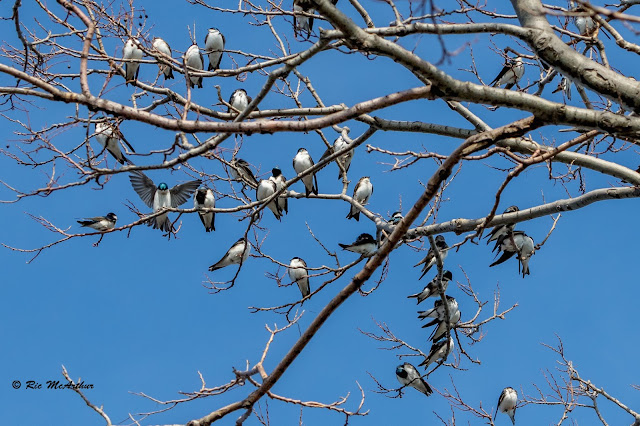 We went with friends down to Pelee and walked out to the tip that isn't there anymore. It comes and goes depending on what Mother Nature is up to. Not a big selection of birds but we had good looks at what we found.
Tachycineta bicolor Migrating and wintering Tree Swallows can form enormous flocks numbering in the hundreds of thousands. They gather about an hour before sunset and form a dense cloud above a roost site (such as a cattail marsh or grove of small trees), swirling around like a living tornado. With each pass, more birds drop down until they are all settled on the roost.
Post a comment
Read more

The early snake gets the worm. 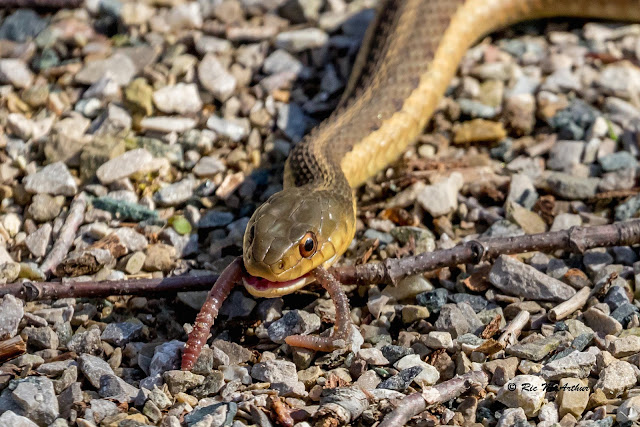 April 12, 2017
American woodcock was standing in the middle of the road and then he started walking.

He could give chickens a lesson. 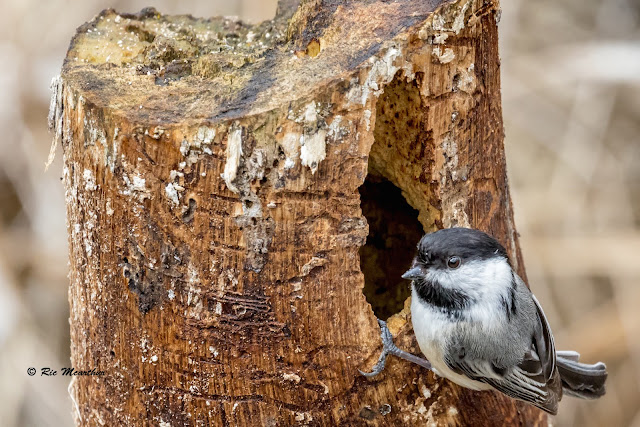 Spotted this black capped chickadee and its partner excavating a hole in this stump today. Hope it stays active so I can follow it through the season. Poecile atricapillus The Black-Capped Chickadee hides seeds and other food items to eat later. Each item is placed in a different spot and the chickadee can remember thousands of hiding places.
Post a comment
Read more 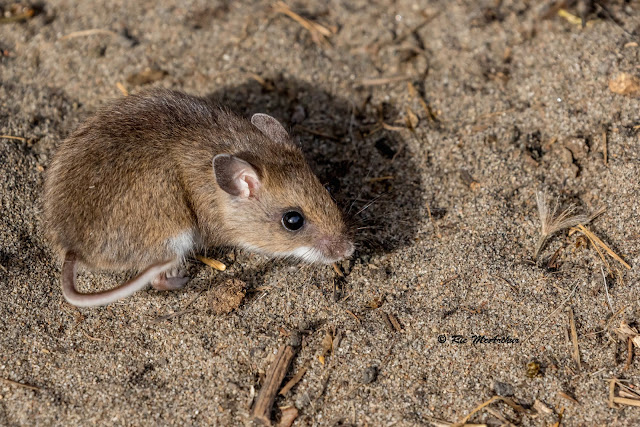 We saw this one in the dune habitat at Rondeau. It didn't seem concerned about us. They are not agricultural pests, and they are important ecologically because owls, weasels, snakes, and many other predators eat them. Individuals may live several years in captivity, but an almost complete turnover occurs annually in wild populations. In some places they carry the tick that transmits Lyme disease. source - Smithsonian National Museum of Natural History.
Post a comment
Read more 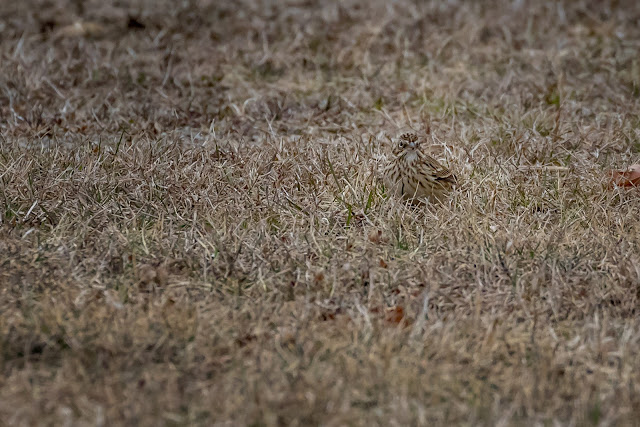 This is the first good look at this sparrow and the first time I was able to photograph it.
Rather non descript or to use the technical birding term it is a Little Brown Job or LBJ.
Not to be confused with Lady Bird Johnson.

Thanks to Allen Woodliffe who told me where the sparrows were.
Pooecetes gramineus

The Vesper Sparrow responds quickly to changes in habitat; it is often the first species to occupy reclaimed mine sites and abandon old farm fields as they return to forest.
Post a comment
Read more 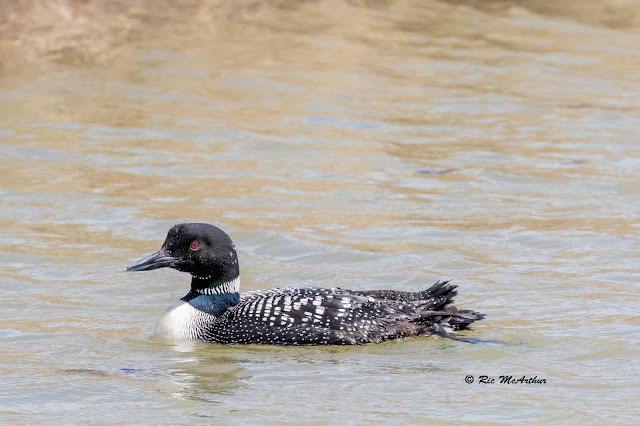 Went out looking for birds today and decided to check the area where we have seen snowy owls. No owl but there was a nice selection of ducks and grebes and a LOON. We like loons. Gavia immer Loons swallow most of their prey underwater. The loon has sharp, rearward-pointing projections on the roof of its mouth and tongue that help it keep a firm hold on slippery fish. Migrating loons have been clocked flying at speeds more than 70 mph.
Post a comment
Read more

A sound of spring. 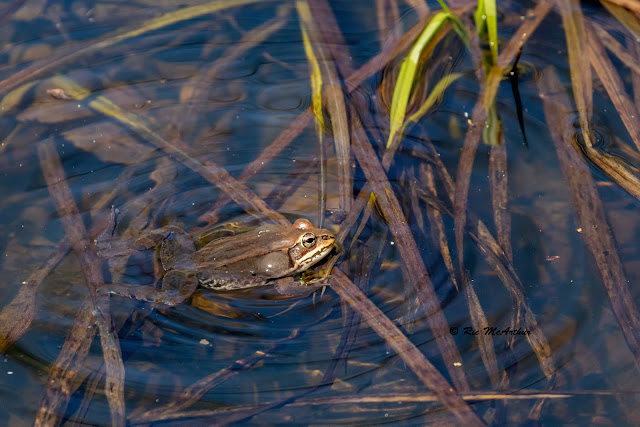 Frogs are calling in large numbers these days.
One one boardwalk I watch 7 or 8 in one pond as they called.
The circular wave patterns gave away the location of the frogs.

Frogs have a tympanic membrane, or tympanum. This is the circular patch of skin directly behind its eye  is what is commonly called its eardrum.
The tympanum transmits sound waves to the middle and inner ear, allowing the frog to hear both in the air and below the water.

The frogs I was watching bulged the air sacks on the side of the neck to make sound. Others have throat sacks but the principal is the same.
Post a comment
Read more 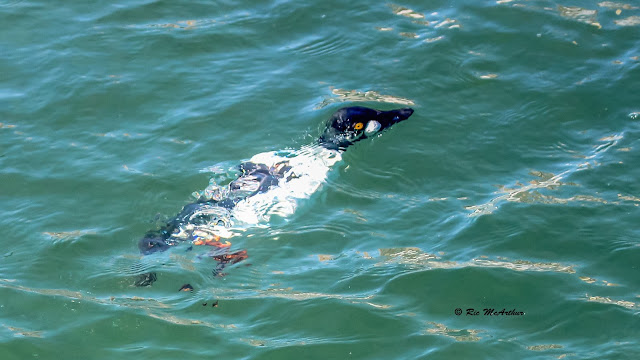 From a few years ago.
Goldeneye are a diving duck that travel long distances underwater.
I caught this one as it came back to the surface.

No extra details, internet is slower than dial up. Anyone remember dial up? 2400baud? 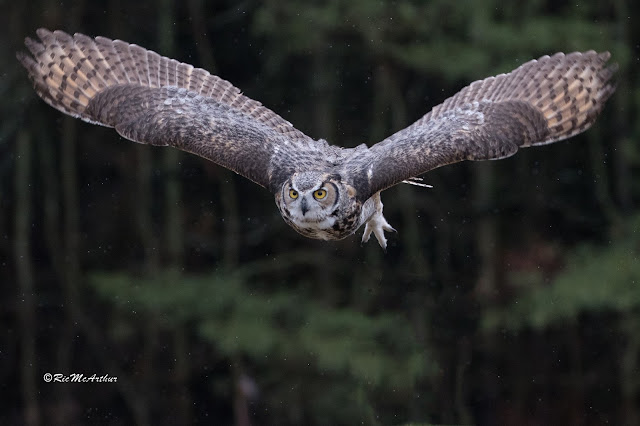 Another photo from the photo shoot at the Canadian Raptor Conservancy.
In the rain. 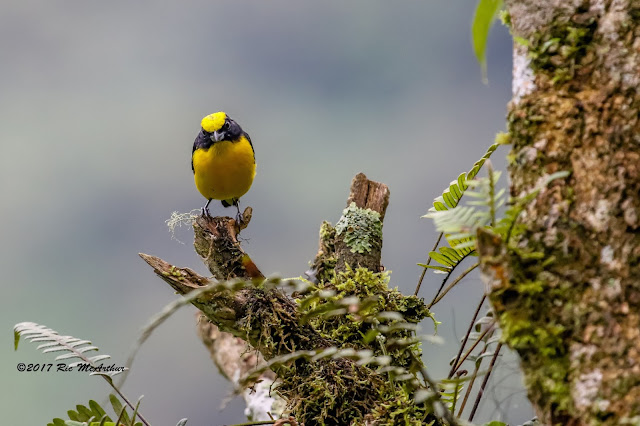 So many colourful birds that you don't know which way to look first.
Euphonia xanthogaster
The Orange-bellied Euphonia is usually found in pairs or small groups, and typically feeds relatively low above the ground.
Post a comment
Read more
More posts